The idea for the True/False Film Fest was hatched in the summer of 2003, which some have called “The Year of the Documentary” for the raft of breakthrough nonfiction films (Capturing the Friedmans, Spellbound, etc.) that hit the big screen. Wanting to create a film event that celebrated this new wave of exciting and cinematic documentaries, we built off of five years of exhibition we’d been doing around Columbia, Missouri.

Our venues came first, uniting three theaters all within easy walking distance of each other. These included our first home at the movie theater turned music venue The Blue Note, our storefront café and microcinema the Ragtag Cinema, and the 1,200 seat Missouri Theatre, a movie palace built in 1928 that hadn’t had films projected in almost 15 years.

With the Missouri Theatre, Blue Note, and Ragtag making a downtown theater district, we debated what flavor of festival we might put together. Focusing on nonfiction derived from our love of documentaries and our town’s heritage of great journalism. With exciting developments in video technology and a new crop of filmmaker wanting to make vital work, the time was ripe for a fest that championed the cutting edge of nonfiction filmmaking.

In our first year, we hosted a remarkable group of filmmakers from around the world, including director Kevin Macdonald, who presented Touching the Void to a sold-out crowd of 1,200 people. Bruce Sinofsky, was given our first annual True Vision Award for his work with Joe Berlinger on films such as the director of Brother’s Keeper and Metallica: Some Kind of Monster. Other stand-out directors included Mark Achbar with The Corporation, Sarah Price with The Yes Men, and editor Karen Schmeer with The Fog of War. Timothy “Speed” Levitch, the tour guide from The Cruise, gave a memorable tour of Boone County, a place he had never been before.

Our second year built on the strengths of the first, by bringing in more than 50 filmmakers from around the world, and increasing ticket sales to more than 6,500. The opening night film, Murderball, featuring a Q&A with filmmakers Henry Alex Rubin, Dana Alan Shapiro and Jeff Mandel, drew more than 1,000 attendees. Other highlights included I Like Killing Flies with director Matt Mahurin, The Wild Parrots of Telegraph Hill with subject Mark Bittner, and a cinematic field trip to a livestock sale barn for a screening about an upstate N.Y. auction barn.

In years three and four, T/F attained more prominence with guests that included Ward Serrill (The Heart of the Game), Kirby Dick (This Film is Not Yet Rated), Jeff Feuerzeig (The Devil and Daniel Johnston), Marshall Curry (Street Fight), Annie Sundberg (The Trials of Darryl Hunt, The Devil Came on Horseback), David Sington (In the Shadow of the Moon), Brett Morgen (Nimrod Nation), and more than 60 others each year. The festival gained recognition for innovative programming such as its signature game show/filmmaker showcase “Gimme Truth!” and the commissioning of a live soundtrack to the classic British documentary Night Mail.

In 2007, attendance neared 15,000, the volunteer staff topped 250, and we inaugurated two unique projects in conjunction with visiting directors. The SWAMI program matches industry professionals with a handful of first-time directors who are mentored in festival strategy, distribution, and marketing. In its first year, professionals included director Fenton Bailey (The Eyes of Tammy Faye), independent film guru John Pierson, and distributors Liesl Copland (Red Envelope) and Debbie Zimmerman of Women Make Movies. The True Life Fund raised more than $8,500 for the subjects of a documentary about an African orphanage, and will select a film’s subject each year as recipients.

In 2008, working under a leap year theme, the festival expanded east to the Stephens College campus, welcoming a handful of new venues. Even with the Missouri Theatre closed for renovations, attendance jumped to 18,000. The festival hosted an exciting lineup of filmmakers, including director James Marsh, whose stunning Man On Wire closed the festival at a packed Jesse Auditorium screening. Fresh from an Oscar win for Taxi to the Dark Side, director Alex Gibney received the True Vision award. “This is my first stop after that event in Hollywood,” he noted in his acceptance speech. “I looked at that as a warm-up to True/False.”

In 2009, with the newly-restored Missouri Theatre back in operation, festival attendance jumped to 23,000. The festival continued its successful SWAMI mentorship program and celebrated its first female True Vision winner, the incredibly talented and accomplished Kim Longinotto (Rough Aunties). Festival goers raised over $10,000 for the underground journalists profiled in Anders Østergaard’s Burma VJ.

In 2010, the festival phased in a new venue, the Eero Saarinen-designed Chapel, and more than 25,000 tickets were sold. Laura Poitras (The Oath) was honored with the True Vision distinction and festival-goers raised $8,500 for the courageous Cambodian journalist Thet Sambath, featured in Enemies of the People.

In 2011, T/F’s ticket sales topped 30,000, and over half of the attendees came from outside of Mid-Missouri. Our True Vision Award winner was fest favorite James Marsh (Man on Wire) and our most successful True Life Fund campaign yet raised more than $15,000 for the stars of The Interrupters.

In 2012, the festival set several new records. Ticket sales topped 37,500, and with the help of generous matching grant from the Bertha Foundation, True/False audiences raised $30,000 for the five brave families featured in Lee Hirsch’s documentary Bully. With its True Vision award, the festival celebrated the career of Russian director Victor Kossakovsky.

In 2013, the festival celebrated its tenth anniversary and hit several new milestones. Ticket sales surpassed 43,500, a ten-fold increase since our first year. With the help of a generous matching grant from the Bertha Foundation, True/False audiences raised nearly $37,000 for RISC (Reporters Instructed in Saving Colleagues) and the Milton Margai School for Blind, two organizations featured in Which Way is the Front Line From Here?, Sebastian Junger’s portrait of his colleague Tim Hetherington, who died while covering conflict in Libya. Hetherington and Junger co-directed Restrepo (T/F 2010). With its True Vision award, the festival celebrated Lucien Castaing-Taylor and Verena Paravel, the filmmaking team behind Leviathan.

2014’s visual theme Magic/Realism, spotlighted stage magic’s connection to nonfiction filmmakers, as 100 visual artists reinvented venues and other public spaces. T/F introduced the PTA (Pay the Artist) initiative offering all visiting feature filmmakers honoraria in addition to travel expenses, a program intended to be broadly influential. The star/subjects of Cynthia Hill’s Private Violence, Kit Gruelle and Deanna Walters, shined a light on domestic violence while receiving $23,000 in support from audiences and the Bertha Fund. Amir Bar-Lev (Happy Valley, My Kid Could Paint That) was recognized with the mid-career True Vision award. The festival’s music program blossomed, as 40 musical acts played before films, including the return of French street sensations Les Trois Coups and the dynamic Mexican band La Operacion Jarocha.

2015’s visual theme of The Long Now inspired artists of all stripes to reflect on time and what endures. Recognized for the True Vision Award was English filmmaker Adam Curtis, whose relationship with the festival began with 2005’s The Power of Nightmares and continued with 2010’s It Felt Like a Kiss and this year’s Bitter Lake. The True Life Fund raised $35,000 for Adi Rukun of The Look of Silence to to open a brick-and-mortar optometry business in his new community in Indonesia. T/F’s DIY Day began with an event for all of Columbia’s 10th grade students, a standing-room-only screening at the Missouri Theatre of future Oscar nominee, What Happened, Miss Simone? followed by a Q&A with director Liz Garbus. Despite the temporary loss of the festival’s largest venue, Jesse Hall, attendance went back over 45,000 as three new venues filled the gap, and balmy spring weather gave everyone a lift.

Increasingly True/False has taken its place on the world nonfiction stage as a forward-thinking champion of outstanding nonfiction work. We’re immensely proud of how much of a community effort T/F remains — whether it’s downtown restaurants feeding our wandering musicians, high school governments raising money for the True Life Fund, or 800+ mid-Missourians showing up to volunteer.

It’s always been our intention that True/False serve both the international nonfiction community as well as the people of mid-Missouri. While we’re proud of how far the fest has come and the recognition we’ve received, we plan to continue working to make sure that True/False will never lose its homegrown, handmade qualities. 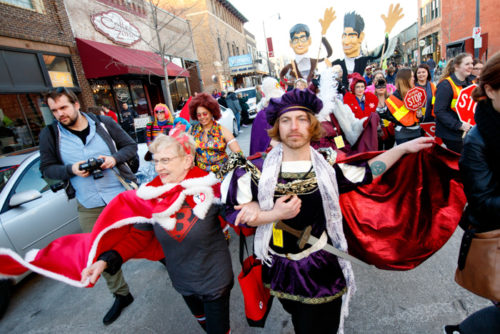