True/False Film Fest is proud to announce its 2018 slate of 40 new feature films that expand the boundaries of nonfiction and invite audiences to be challenged, inspired, and entertained.

These films were selected from roughly 1,300 submissions plus hundreds more scouted at festivals around the world. The festival seeks to highlight work that exhibits the highest levels of craft, tells untold stories and creatively advances the documentary form.

A half-dozen films will mark their festival debut at True/False. América, from filmmaking team Chase Whiteside and Erick Stoll, tenderly portrays a playful trio of brothers who step up to take care of their grandmother in Colima, Mexico. In Black Mother, Khalik Allah takes audiences on a spiritual journey through Jamaica. Miles Lagoze’s Combat Obscura is the ultimate insider’s view of Marines in Afghanistan. Lovers of the Night, from Anna Frances Ewert, introduces Irish monks, holding on faithfully to their fragile monastery, as they confide their most profound secrets. Kim Hopkins’ Voices of the Sea takes viewers to a Cuban seaside where a couple must wrestle with whether to stay or go. The Task is Leigh Ledare’s provocation in which a confounding group of strangers cross-examine their tangled group dynamic.

Twelve other films are launching their stateside tours at True/False. Leilah Weinraub’s Shakedown is already being described as a “lo-fi Magic Mike XXL,” a raucous celebration of a black lesbian strip club. Flight of a Bullet is a revelatory, singular take on the war movie embedded within a controversial pro-Ukrainian group. Grace Jones: Bloodlight and Bami features the iconic singer as she magically dances between down-to-earth moments with her Jamaican family and pure transcendence on stage. Makala is an epic journey film set in the Democratic Republic of Congo.

Four countries are represented for the first time within the True/False selection. From Uruguay, directors Adriana Loeff and Claudia Abend observe a prickly marriage in La Flor de la Vida. Both The Family, Rok Bi?ek’s intimate decade-long study of a young father, and Playing Men, Matjaž Ivanišin’s lush survey of regional games and sports, hail from Slovenia. Dieudo Hamadi’s Kinshasa Makambo follows the efforts of a group of young activists in the Democratic Republic of Congo. The Next Guardian, co-directed by Dorottya Zurbó and Arun Bhattarai, delivers a charming story of two siblings in Bhutan.

2018 continues with the fest’s most internationally diverse lineup ever. This includes a far-ranging group of films from Argentina (Primas), Chile (Adriana’s Pact), Brazil (Gabriel and the Mountain), Mexico (Artemio), Romania (António e Catarina), France (Makala), Germany (Lovers of the Night), the UK (American Animals, Voices of the Sea, Three Identical Strangers, Grace Jones: Bloodlight and Bami, and Westwood), Syria (Of Fathers and Sons), China (Taming the Horse and Self-Portrait: Birth in 47KM), and Russia (Flight of a Bullet).

As in past editions, this year’s True/False lineup features a selection of fiction films in conversation with their nonfiction brethren. American Animals is a white-knuckled heist film from director Bart Layton (The Imposter). In The Rider, a breathtaking new film from Chloé Zhao, a young cowboy’s family and friends portray versions of themselves as Zhao traces a script around the experiences of her non-professional actors. Gabriel and the Mountain, from Brazilian director Fellipe Barbosa, retraces his adventurous friend’s last days in East Africa with the help of the real people who met him.

And last, but certainly not least, the latest edition of the festival features films from two frequent visitors – Robert Greene returns for a record fifth time with Bisbee ‘17, a wildly creative look at labor history in Arizona. And Morgan Neville (Oscar-winner with 20 Feet From Stardom) presents his fourth T/F feature, Won’t You Be My Neighbor? (presented by Veterans United), a cultural history of Fred Rogers. And True/False will feature first-time feature director Tim Wardle’s Three Identical Strangers as the post-parade Reality Bites screening.

Additional announcements to come include the release of our shorts slate tomorrow, Thursday, February 8; and the full schedule on Saturday, February 10. 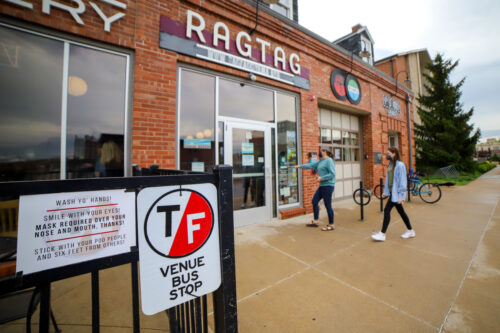